Welcome to Dashing Hamsters. I created this website back in 2005, initially to have a place to share my love of hamsters. Throughout the years I have come across a lot of information that just often doesn't match up. Care standards and information are outdated, and these little creatures are misunderstood by many. So I decided to make this website as more than just a hamster lover's website, but a hamster website for modern owners who are looking for up to date advice on how to care for and understand their beloved hamsters. On DH you can learn about hamsters, see some cute pictures and read through a hamster filled blog. 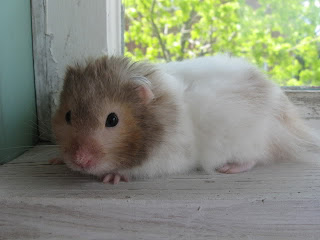 The first species of hamster to hit the pet market is the Syrian hamster (Mesocricetus auratus), since then they have remained the most common and most popular species of hamster. In 1912 when Aharoni caught the ancestors of today’s Syrian hamsters he quickly found upon raising these hamsters that they were solitary creatures. While attempting to breed them in captivity some of the hamsters he caught killed each other while contained in the same cage. Upon more careful housing practices he successfully bred Syrian hamsters in captivity.

It wasn’t Aharoni that first realized that Syrian hamsters were solitary animals however. In 1839 George Waterhouse officially classified these hamsters as their own species. Along with this he gave a description in which he described the Syrian hamster as a solitary species based on his observations.

N.C. Pratt and R.D. Lisk’s study (Effects of social stress during early pregnancy on litter size and sex ratio in Mesocricetus auratus) suggest that when pregnant females were kept together, that the subordinate females birthed smaller litters with less male pups in comparison to the females that found themselves in a dominant position of the hamsters. It was found that some of the babies were reabsorbed by the subordinate females likely to deal with the stress of the social situation. Basically living together negatively affected the size of litters of subordinate female hamsters.

Fritzsche P., Riek M., and Gattermann R.’s study (Effects of social stress on behavior and corpus luteum in female golden hamsters) indicates that when females were kept in pairs for five weeks, that they showed physical indications of stress when kept in groups. Basically after comparing certain physical developments after this time between group kept females and singly kept females, those kept in social situations showed signs of having endured stress.

In a book intended to help aid researchers in understanding the use of hamster’s in laboratory conditions, it is expressly mentioned that, “Adults generally live one to a burrow and will readily fight one another (Nowak and Paradiso, Anderson and Jones, 1984)”.

In the wild Syrian hamsters only come together to mate. The female then raises her young in her burrow and when the pups are old enough to survive on their own, she ejects them from the burrow for them to begin their own solitary lives. The male has no interest to help raise the young and could even prove a danger to the litter. There is some speculation that a pup may adopt the nest from the mother, though there is nothing conclusive about this at this time. The point is, they do not live together. In captivity Syrian hamsters can live together until about six weeks of age, some as long as eight weeks. At this point the chances of fighting increases and it is important that they are separated. They may seem to enjoy each other’s company at a young age, but it will not be long before those play fights become more serious and injury or death could be the end result for one or both hamsters. Gender has no factor in sociability of this species.

Some people have come out to say that they kept Syrians together with no incident. Even if they do not fight right away, it is still stressful for them to be forced in this unnatural predicament. Stress lowers their immune system and puts them at risk of other health issues. Not to mention they could turn one day while you are at school or or work, or one night while you are sleeping. Unable to help them and only to return or wake up and find one or both hurt or dead. It is simply not worth the risk. Within a day they will settle into solitary life as nature has intended and they will be better off for it. It’s nice to think that your pets are the exception to nature, but really the chances of that being true are too slim to risk it.

Hamsters aren’t like humans or even like some other species of rodents. They do not crave social interaction as we do. While they are often content to interact with humans, hamsters of any species are not welcome in their heart.
Posted by Holly at 2:37 p.m.

Email ThisBlogThis!Share to TwitterShare to FacebookShare to Pinterest
Labels: Species